Ropepro were pleased to assist AGL Hydro recently with the inspections of the Upper and Lower Rubicon Penstocks and Syphons which form part of the Historic Rubicon Hydro Electricity scheme in Victoria’s North East. This project presented a number of challenges that needed to be overcome in order to carry out this task safely.

AGL Hydro conducted a planned outage of its Upper and Lower Rubicon Penstocks in order to carry out internal and external inspection and repair.

The Rubicon penstock has a 443-metre drop over its 1,305-metre length, which coupled with its 800mm approx. diameter presents challenges in order to safely access the inside of the pipeline, communicate with a technician within the pipeline and potentially rescue a technician from anywhere inside the length of the pipeline.

Due to the age of the Scheme and the Penstocks, there is limited amount of historical data to draw on to ascertain the existing condition of the asset, air quality within the penstock and its structural integrity.

Over a number of weeks Ropepro worked alongside AGL and its contractors to develop a plan to safely access the Penstock, record findings and gather photographic and video footage of its condition.

Replacement of corroded Rivets was also carried out requiring coordination of external and internal pipeline work positions and development of repair methodology.

The use of Industrial Rope Access techniques coupled with Confined Space Entry controls allowed the safe entry of the pipelines. The use modern video recording devices also meant that all vision obtained during the course of this inspection and repair was able to be viewed by engineers and key stakeholders. 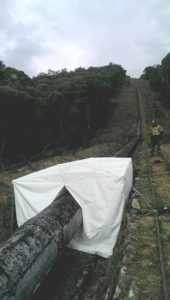 If Ropepro can assist you with accessing, cleaning or maintenance of structures or assets under your responsibility, please don’t hesitate to contact us